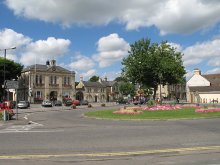 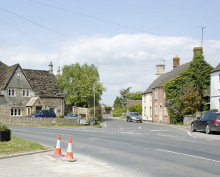 Yatton Keynell, Wiltshire © Maurice Pullin
Dating around Corsham!
We have one of the UK's largest dating websites - focused on Corsham!  There are mature, all age, Asian and Christian singles just waiting to hear from you. Browse and upload your profile FREE !
Covid Virus Update
CLICK for Cases in Corsham

Want to advertise on this website? Create your advert now.

Thoughts on the levels of religious messages

Personally, I like to corroborate or test religious teaching scientifically, against other religions or historically before excepting it. The Bible appears to contain several major contractions? However, this is often only because some passages elate specifically times in history and so to the needs of different spiritual cultures.

Ecclesiastics was probably written around 180 BC. However the New Testament however was created 2 Centuries later and was essentially ‘the upgrade’ a new Covenant

However Our Lords Beatitude ….. Blessed are the peacemakers: for they shall be called the children of God. Delivered 200 years later

The New Testament is full of non-violence. Our Lord told us to ‘turn the other cheek’ (Matthew 5:38-40), to ‘walk the extra mile’ (Matthew 5:41) with our enemies and are reminded that ‘those who live by the sword die by to sword’. How does all this relate to war in 21st Century. Let’s learn the from the lessons of history

In King David’s time, probably around 1000 BC, nations routinely went to war in the spring. Victorious armies also routinely put to the sword not only the entire opposing force or city but all their wives and children – even sometimes their animals!

We don’t do that now

We don’t do that now

When the United Kingdom was in ‘colonial mode’, we ‘held sway’ over 50 countries - over 412 million people or 23% of the world’s population. The world was pink! This was thought to be a ‘good thing’.

By the middle of the 20th century, we had accepted the error of our ways and rightly returned the lands of our conquests to their indigenous inhabitants’. Initiating war with the world is now unthinkable – we are 21st century nation. We value being a part of the global community of nations. We avoid physical violence.

In 1949 NATO was create which is a purely defensive organisation. Generally, the developed nations are now much near the New Testament goal.

When António Guterres, the head of the United Nations, entered Kyiv on 28th April he observed that “The Russian war is an absurdity in the 21st century.”

In short, nations can grow out of war. The question arises is how do we relate to expansionist nations like Russia and China still caught in 19th Century colonial era and seemly even ignore the 159 articles of the Geneva convention

How it can the wisdom of the Bible provide an interface for us as the East and Western block confront each other? Surely, we have to speak in a language they understand and operate at - a level they understand.  This means following Ecclesiastes 3

However, once we come into the 20th and 21st Century powers we start to pick up our Christ’s Sermon on the Mount teaching.

Blessed are the peacemakers: for they shall be called the children of God.

Non-violent resistance becomes both a humane and effective force. Gandhi conducted a nonviolent campaign to remove us from India and won. Ultimately, we rightly gave up our entire empire voluntarily. The Commonwealth was born

Hopefully any future ‘wars’ will be sanction driven and nonviolent. Even now China must be watching the commercial decimation of the Russian economy and ultimately the downfall of President Putin.

It is important to remember the benefits of following and living ethical teaching.

History records the fates of tyrants and war mongers as being grim. Hitler died in a bunker, Mussolini by public execution, Saddam Hussain in ignominy and hanging. Malachi 4 seems whole appropriate

The transition between the states of war is appallingly painful. However, we can take comfort from the way the world has come to the aid of Ukraine just as it come to our aid in our War against Hitler. Let us pray that the Ukraine War against Russia is the War that ends wars and that we can look forward to the peace of peacemakers:

This Microportal is built on the 2day Microportals platform which provides you with 3 click access to local and global information crucial both to your personal and working life. The platform provides live local data on transport, what's on, accommodation, eating out, shopping, sport, religion and weather as well as comprehensive reference and resource sections including TV, radio, online shopping, route planning, health, education and more.